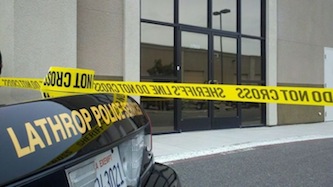 Photo Courtesy of Central Valley TV www.centralvalleytv.net
Robbery is a "serious" and "violent" making it a "Strike" under California's "Three Strikes Laws". If convicted of robbery the person would have to do 85% or more of their commitment time before being released from custody. Simply put robbery is taking property of another with force or fear.

Although similar to a 1st Degree Robbery, car jacking has its own elements and sentencing triad. Under Penal Code § 215, someone who takes a car of another from the other person's immediate presence by using force or fear is guilty of car jacking. The sentencing triad for this crime is 3, 5 or 9 years in prison.

This enhancement is very simple. Use a gun during certain crimes, including robbery then you get extra prison time. 10 years for displaying the gun in an intimidating and menacing manner. 20 years for discharging the firearm. 25 to life for shooting someone that causes great bodily injury. That time is in addition to anytime given for the underlying felony. So for example if one commits a second degree robbery with a gun but does not discharge the gun the judge would sentence them for the crime + 10 years. Therefore the minimum prison sentence possible for a 2nd Degree Robbery with a gun is 12 years prison.

Under California law and Penal Code § 186.22(b)(1)(C), if the robbery was committed "for the benefit of, at the direction of, or in association with any criminal street gang" and that is alleged and proven by the government (prosecution) then an additional 10 years will be added to any sentence on top of, additional to and CONSECUTIVE to any sentence given for the underlying robbery. (see Penal Code § 186.22(b)(1)(C))

Kidnapping For The Purpose Of Robbery

Under California Law and Penal Code § 209(b) kidnapping for the purposes of robbery is a crime itself but is similar to a conduct enhancement. Most basically it is where someone is kidnapped to effectuate a robbery. If convicted of this crime the person receives 7 years to life in prison. Any other enhancements would be in addition to or consecutive to this crime. For example if the kidnapping for robbery involved the displaying in a intimidating or menacing manner of a gun, then the person convicted could expect to do 7 years + 10 years to life = 17 to life.

When faced with this type of crime, beside the obvious defenses, what is critical is element 3 - the substantial distance prong. There is not a number of feet or inches that is necessary to prove this element. It is a matter of degree. Moving someone from one room to another is probably enough for the government to prove this element but every case is very fact specific.